Green Hydrogen Systems, a leading provider of efficient pressurised alkaline electrolysers used in on-site hydrogen production based on renewable electricity, has today signed an agreement with Liquiline for delivering electrolysis equipment for a project in Norway with Dalane Energi as the end customer. Hydrogen Solutions (HYDS) and the Port of Egersund are also closely involved in the project.

The order includes the supply of two GHS HyProvide™ A90 electrolysers with a combined capacity of 0.9 MW for the production of green hydrogen from renewable electricity. Manufactured by Green Hydrogen Systems and operated by Liquiline/Dalane Energi, the electrolysers will be deployed in a 40 ft container as a complete green hydrogen plant. Green Hydrogen Systems will be responsible for delivering the electrolyser units and will support the project with on-site maintenance and remote monitoring and support as part of a three-year service agreement.

The electrolyser will be part of the EU-funded Horizon 2020 project ROBINSON. Dalane Energi is a partner in the project, which aims to establish a system to combine and integrate local green energy sources such as hydrogen, waste heat, gasification of wood chips, and electricity. The produced hydrogen will be delivered to the ROBINSON project, and in addition sold to external users. The goal is to scale up the production and establish a hydrogen ship bunkering operation in close cooperation with the Port of Egersund.

Liquiline is a Norwegian-based gas technology provider focusing on zero-emission turn-key hydrogen solutions, including production, distribution and bunkering. Liquiline has been a Green Hydrogen Systems partner since 2019 and this is its second order from Green Hydrogen Systems.
“We are pleased to be a part of the exciting and ambitious ROBINSON project. We see it as an important step in making green hydrogen commercially available, which is needed to assist the energy transition. We are proud to be a Green Hydrogen Systems partner. Their scalable solutions based on local hydrogen production close to the customers, is specially adapted to countries like Norway with long distances and high distribution costs”, says Knut Førland, Managing Director of Liquiline.

“We at Green Hydrogen Systems are thrilled that Dalane Energi has chosen our efficient electrolysis technology for their exciting project in Norway. We look forward to working on this project together with Dalane Energi and our local partner, Liquiline. Both parties share our vision to pioneer the field of green hydrogen and drive a sustainable global energy transition”, says Green Hydrogen Systems CCO Søren Rydbirk.

When fully operational during Q1 of 2023, the ordered electrolysers have capacity to provide approximately 389 kg green hydrogen per day.
“Dalane Energi had the first establishment of renewable energy supply for public use in south-western Norway in 1905. The company will now be the first establishment of green hydrogen production for public use in the same region. We are very satisfied to be a pioneer making green hydrogen available, and to put Dalane on the Norwegian hydrogen map”, says Idar Sønstabø, Managing Director of Dalane Energi.

Green Hydrogen Systems is a leading provider of standardised and modular electrolysers for the production of green hydrogen solely based on renewable electricity. With its wide range of possible applications, green hydrogen plays a key role in the ongoing fundamental shift in our energy systems towards a net-zero emission society in 2050. As a result, the demand for green hydrogen is surging, requiring a significant scale-up of electrolysis capacity. Founded in 2007 and building on more than 10 years of technology development, Green Hydrogen Systems today has a commercially proven and cost-competitive electrolysis technology endorsed by leading energy, as well as industrial companies.

Founded in 2005 and has long cryogenic experience, mainly from the LNG and LBG business. Liquiline supplies today complete solutions for the production of green hydrogen to Norwegian customers and the international maritime industry. From just a few hundred kW to the multi-MW scale, delivered at the lowest levelised cost of hydrogen available today. Liquiline established HYDS (Hydrogen Solutions) in February 2021 together with SKL (Sunnhordland Kraftlag). HYDS mission is to develop, build and operate plants for local production of green hydrogen, and handle dispensation and bunkering.

Dalane Energi is a leading regional energy company founded in 1905 and located in Egersund in the southwest part of Norway. Dalane Energi is a group engaged in hydropower production, energy distribution, and energy sales. The company is one of the pioneers within the Norwegian hydropower industry making clean energy possible for over a century. Dalane Energi focuses on energy transition, and the partnership in the EU-funded Horizon 2020 project ROBINSON is part of this strategy. 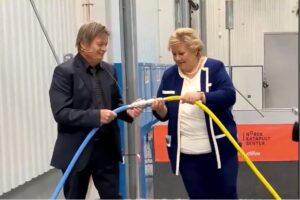 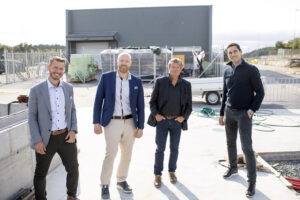